Originally released on small label Aronda in 1972 Dzyan´s eponymous 1st Album was their most rock oriented one. Similar to their SWF-recordings 6 month later, Dzyan played a slightly jazzy form of progressive rock with hints of Wolfgang Dauner, flashes of Zappa´s "Hot Rats" and even some Van Der Graaf Generator-styled saxophone-fronted diversions. As the Freeman Brothers write in their classic book "The Crack In The Cosmic Egg" this is an "intriguing album that is still fresh today. 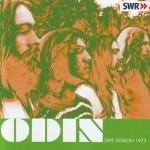