The 2017 full-length (recorded in 2016) by the reunited German band, which already became a popular name in jazz rock/fusion circles as early as in the mid-late '70s. These contemporary tracks were taped with the original line-up, except for the drummer. Featuring all original material, the total running time of the CD is more than 61 minutes.

Morpheus "For A Second" CD 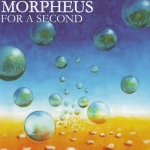